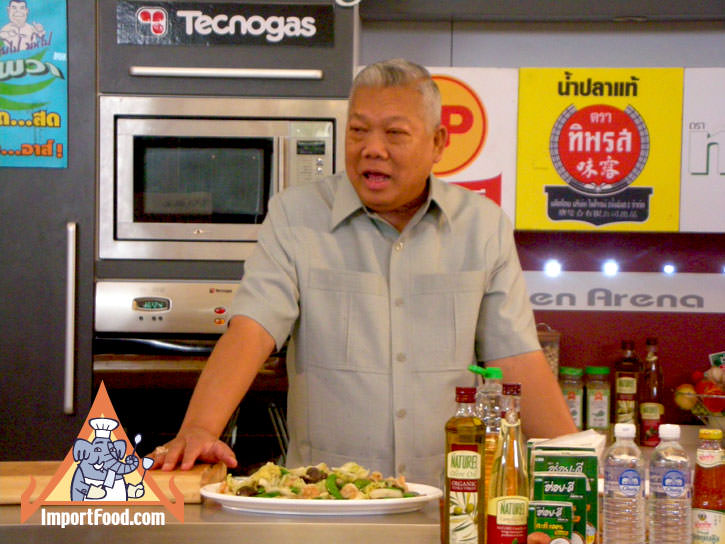 February 5th 2008 was the first day in office for Prime Minister Samak, and the first time in world history that a celebrity chef became a nation's top elected official.

Samak has been involved in Thai politics for over 30 years, and since the 1990s has been promoting the art of Thai cooking on both radio and television. He started cooking at the age of 7, and his popular cookbook Chimpai Bonpai (translation: "Tasting, Complaining") is now in it's 9th edition. One innovative Samak recipe: he makes pork leg stew with coca-cola.

In May 2008 Samak invited ImportFood.com to have lunch and attend the filming of Chimpai Bonpai, see photos below.

After his election victory the first thing he did was invite reporters from all over Thailand to his home to sample his homemade noodles (see below). Samak is a true culinary enthusiast, and we think he'll be a great contributor to the reputation and enjoyment of delicious Thai food all over the world.

Might this be a trend that reaches America? Given our current choices, President Bobby Flay doesn't sound too far-fetched.

September 2008 Update: Samak's term as Prime Minister ended prematurely. He had been under severe scrutiny for issues ranging from a land dispute with Cambodia over maps drawn up during the French colonial era, to his role in supporting a former prime minister, and general political turmoil that accompanies any active democracy with an uninhibited free press. Ironically, Samak's decision to continue filming his cooking show after becoming Prime Minister was successfully used against him by a group of opposition-party senators. A court motion to dismiss Samak succeeded on the basis that, under Thai law, it's illegal to work for any private company after getting elected. Thus Samak was ousted, and a new Prime Minister was chosen by Parilament a few days later.

November 2009. We are very sorry to report that Samak Sundaravej passed away due to liver cancer.