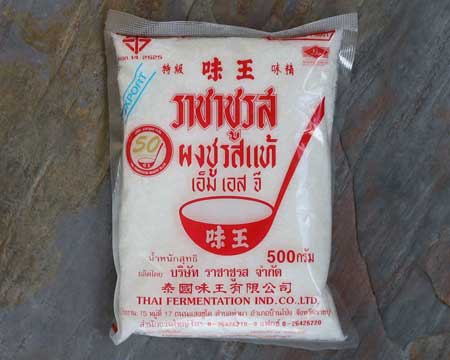 Our MSG is made in Thailand from a pioneer that's been making it for over 50 years.

In Thailand, it is commonly added to recipes to improve the flavor--indeed if you watch our Thai street vendor video series, many chefs add it as they cook everything from noodles to fresh salad. In Thai msg is called "pong churod", and you can feel free to request a meal with no pong churod if you'd rather avoid it. Thai restaurants often display a sign "No MSG" which usually means they use sugar instead, to add flavor. We like to try a bit of both.

There is no dispute that msg makes food taste better, but msg is controversial. First developed in Japan, from seaweed, msg is a salt of the amino acid - Glutamic Acid (glutamate). Glutamate is a compound naturally found in foods like cheese, mushrooms, and tomatoes. The US Food and Drug Administration (FDA) has classified msg as a food ingredient that is "generally recognized as safe" and does not cause long-term health problems. Msg is in thousands of processed foods in America, found in common brands such as Nestle, Campbells, Frito-Lay, McDonalds, Taco Bell, Hamburger Helper, Knorr, Lipton, Burger King, KFC, etc.

It's often disguised under various names such as "disodium guanylate" or as "flavor enhancer" and others. Some in the medical community say that msg will cause weight gain, children being more sensitive than adults. Some say msg lowers sperm count, causes heart problems, migraine headaches, and other ailments. Ill effects from msg are likely to be suffered due to over-consumption, or intolerance by a particular person.

Healthy, dark green vegetables, high in magnesium, are reported to diffuse ill effects of msg. So if you're not sure, start by using it in a stir-fry that has spinach or broccoli. Aside from that, be careful not to over consume msg. A tad bit, such as a half-teaspoon per serving, goes a long way. 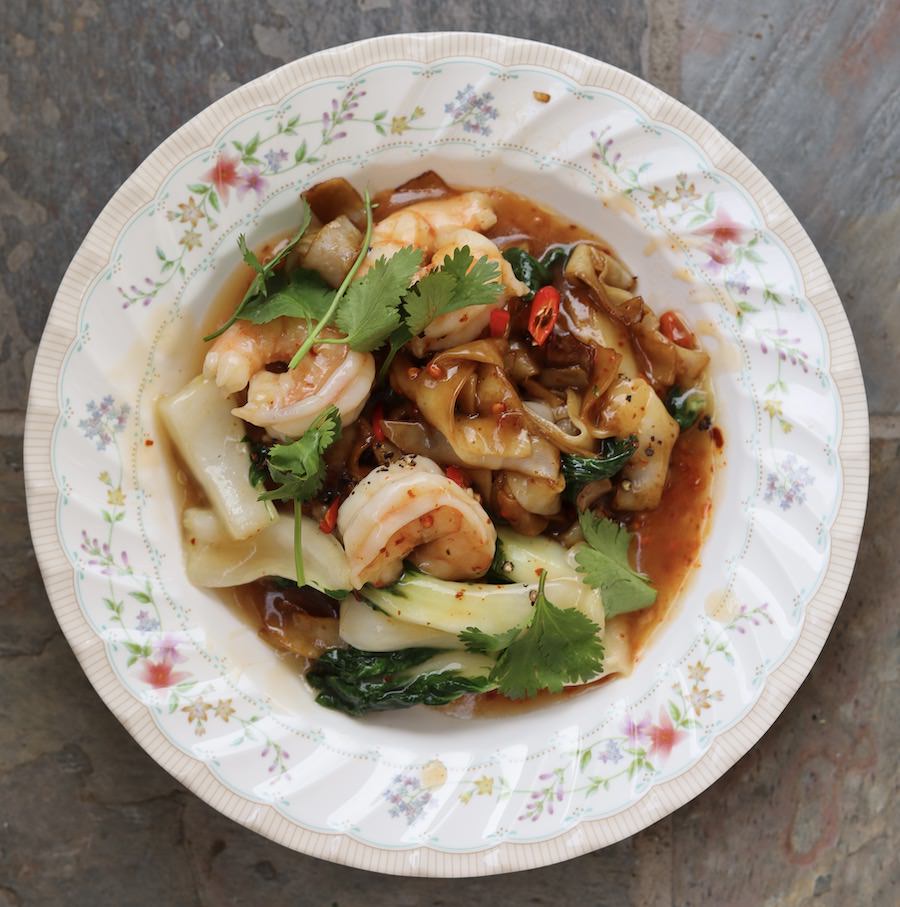 This is a new, elegantly spicy version of our original basic Ladna recipe. with the added complex flavor of our Shrimp Flavor Crushed Thai Chilli -- this is the best Ladna we've ever tasted.

Work quickly and you can create this dish quickly, just like this:

1. Thai Street Vendor Video makingn ladna on the spot, or

We prepared this  in two steps: first fry wide rice noodles until they're just starting to get crispy. Then a sauce is quickly made and poured over the noodles. The translation of Ladna in English is "Pour on the Face".

This has a touch of MSG which is optional but recommended here to get the optimal flavor.

This is a new, slightly less-spicy version of our original kee mao recipe. Kee Mao are drunken noodles, meaning eaten drunk, fiery hot spice level, with beer and/or other alcohol.

The fresh ginger is a nice touch but optional and not authentic Thai for Kee Mao.  Add more fresh Thai chilli peppers to increase heat level.

We like using dark thick soy sauce to give the chicken a darker color but you can also use thin soy sauce instead.

This has a touch of MSG which is optional but recommended here to get the optimal flavor. 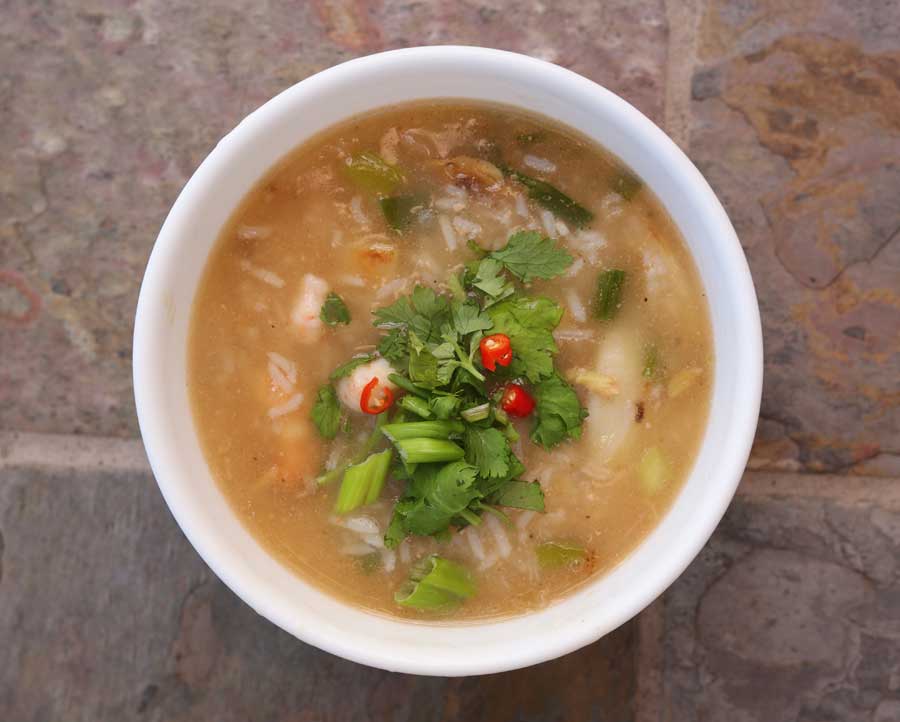 This is a masterpiece seafood soup. You might be surprised it came from your kitchen, with such a nice blend of elegant flavors and texture.  Here we demonstrate all the tricks to make it just right.  The slightly firm rice, rather than the typical mushy congee, makes it distinctive. The trick is to fry the rice when it's still dry, as we show here.